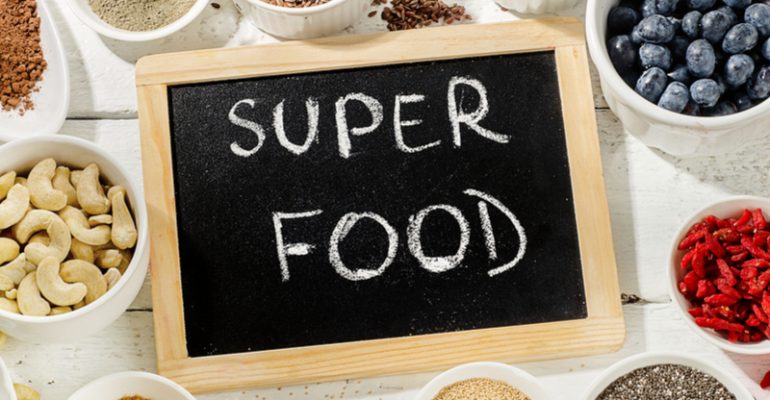 Superfoods – as opposed to vitamins or supplements-are foods that naturally concentrate important nutrients. Unlike dietary supplements, or vitamins taken in isolation, superfoods provide many nutrients that support each other and prevent the kind of imbalances that often occur when vitamins are taken singly. Do we need superfoods? In theory, if the diet is good, we should need nothing more to supplement our daily fare; but can even the most conscientious among us say that our diet is or has been perfect? With the depletion of our soils, the widespread use of additives and the prevalence of sugar, refined carbohydrates and rancid vegetable oils, which all of us have invariably ingested-if not in adulthood, at least in our youth-no one living in an industrial society today can say that his diet has been perfect. For those unwilling or unable to give up bad habits like caffeine, alcohol or smoking, a daily supply of superfoods is essential.

Even those who live in isolated primitive societies seek out special foods for optimum health-foods high in fat-soluble vitamins, such as fish eggs and organ meats, to ensure reproduction and strong healthy children; soaked grains for strength and stamina; and herbs to prevent certain diseases.

The following short list is not meant to be exhaustive but only to provide a few examples of superfoods that can, in general, be taken by everyone. Herbal products for specific ailments are best taken with the advice of a holistic health practitioner.

Azomite Mineral Powder: This powdery mineral supplement, containing montmorillonite clay and many other compounds, comes from an ancient seabed. It is an excellent source of silica, calcium, magnesium and the gamut of trace minerals. Clay also has detoxifying effects as the negatively charged clay particles attract positively charged pathogens and take them out of the body. Technically sold as an anti-caking compound and available only in 40-pound bags, Azomite is incredibly cheap when used as a mineral supplement, costing less than one dollar per pound delivered. Take a heaping teaspoon mixed with water daily as an insurance of adequate macro- and trace mineral ingestion in these days of soil depletion through intensive farming.

Acerola Tablets: A berry rich in ascorbic acid, acerola provides vitamin C with numerous cofactors, including bioflavonoids and rutin, to optimize the body’s uptake and use of ascorbic acid. Vitamin C, the most important dietary antioxidant, was popularized by Linus Pauling who recommends taking pure ascorbic acid in amounts up to 15 grams a day for a variety of ailments. But large quantities of vitamin C may be harmful to the kidneys and can lead to deficiencies in bioflavonoids. Only small quantities of natural vitamin C in the form of acerola tablets can provide the same protection as large amounts of pure ascorbic acid, without the side effects.

Bee Pollen: Bee pollen has been popularized by famous athletes who take it regularly for strength and endurance. It has been used successfully to treat a variety of ailments including allergies, asthma, menstrual irregularities, constipation, diarrhea, anemia, low energy, cancer, rheumatism, arthritis and toxic conditions. A Russian study of the inhabitants of the province of Georgia, where many live to 100 years and a few to age 150, revealed that many of these centenarians were beekeepers who often ate raw, unprocessed honey with all its “impurities,” that is, with the pollen. Bee pollen contains 22 amino acids including the eight essential ones, 27 minerals and the full gamut of vitamins, hormones and fatty acids. Most importantly, bee pollen contains more than 5,000 enzymes and coenzymes. It is the presence of enzymes, many of which have immediate detoxifying effects, that sometimes provokes allergic reactions in those taking bee pollen for the first time. If this happens, start with very small amounts and slowly build up to a tablespoon or so per day. Some brands are more easily tolerated than others. Avoid pollen that has been dried at temperatures higher than 130 degrees. Bee pollen can be taken in powder, capsule or tablet form-or in raw unprocessed honey mixed with cereal or spread on toast.

Blue-Green Algae, Spirulina and Chlorella: Blue-green micro algae, and its cousins spirulina and chlorella, grow on inland waters throughout the world-visible as greenish scum on still lakes and ponds. The Aztecs ate it as a staple food, dried and spread on tortillas. Africans of the Sahara region also use dried spirulina with grains and vegetables. These algae are high in protein, carotenoids and minerals. Beware, however, of claims that they can provide vitamin B12 in vegetarian diets. Nevertheless, the high mineral and protein content of the various algae make them an excellent superfood, a good supplement to the diet and a useful product for the treatment of a variety of health problems. Of the three main types of algae, spirulina is said to be the easiest to digest and absorb, because its cell walls are composed of mucopolysaccharides rather than indigestible cellulose. Chlorella needs special processing to improve digestibility of a tough outer cell wall but is valued for its ability to bind with heavy metals and carry them out of the body. Wild blue-green algae is said to have remarkable healing properties but can transform into an exceptionally toxic plant under certain conditions. Freeze drying is said to denature these toxins.

Bitters: Herbal extracts of bitter, mineral-rich herbs are a traditional tonic for stimulating the bile and increasing digestion and assimilation of fats. They often are the best remedy for calming a queasy stomach. One such product is made by Floradix. Another is Swedish Bitters originally formulated by Paracelsus and later “rediscovered” by a Swedish scientist. Bitters supply nutrients from bitter leaves that are often lacking in the Western diet. Many cultures, including the Chinese and Hindu, value bitter herbs for their cleansing,
strengthening and healing properties.

High Vitamin Butter: Deep yellow butter oil from cows eating rapidly growing green grass supplies not only vitamins A and D but also the X Factor, discovered by Weston Price. It can be used as a supplement to regular dietary butter, particularly during winter and early spring.

Cod Liver Oil: Once a standard supplement in traditional European societies, cod liver oil provides fat-soluble vitamins A and D, which Dr. Price found present in the diet of primitives in amounts ten times higher than the typical American diet of his day. Cod liver oil supplements are a must for women and their male partners, to be taken for several months before conception, and for women during pregnancy. Growing children will also benefit greatly from a small daily dose. Cod liver oil is also rich in eicosapentaenoic acid (EPA). The body makes this fatty acid from omega-3 linolenic acid as an important link in the chain of fatty acids that ultimately results in prostaglandins, localized tissue hormones. It is very important for the proper function of the brain and nervous system. Those individuals who have consumed large amounts of polyunsaturated
oils, especially hydro-genated oils, or who have impaired pancreatic function, such as diabetics, may not be able to produce EPA and will, therefore, lack important prostaglandins unless they consume oily fish or take a cod liver oil supplement. Buy cod liver oil in dark bottles and store in a cool, dark, dry place. Some studies indicate that cod liver oil is toxic in large amounts so don’t overdo-1 teaspoon per day is a good rule for adults, half that for children. It’s easy to take when stirred into a small amount of water. Dr. Price always gave cod liver oil with butter oil, extracted by centrifuge from good quality spring or fall butter. He found that cod liver oil on its own was relatively ineffective but combined with butter oil produced excellent results. Your diet should include both good quality, organic butter and cod liver oil.

Evening Primrose Oil, Borage Oil or Black Currant Oil: These oils contain a fatty acid called gamma-linolenic acid or GLA, which the body produces from omega-6 linoleic acid by the action of special enzymes. In many individuals the production or effectiveness of this enzyme is compromised, especially as they grow older. Malnutrition, consumption of hydrogenated oils and diabetes inhibit the conversion of omega-6 linoleic acid to GLA. GLA-rich oils have been used to treat cancer, premenstrual syndrome, breast disease, scleroderma, colitis, irritable bowel syndrome and cystic fibrosis. They have been shown to increase liver function and mental acuity.

Glandular and Organ Extracts: Dried tissue from the glands and organs of animals are being successfully used to treat the same gland or organ in human beings including thyroid, adrenal, pituitary, liver, thymus, spleen, kidney and eye tissue. Athletes and those suffering from chronic fatigue should consider taking dried liver if they do not like the taste of fresh liver. Look for products that have been freeze dried rather than processed at high temperatures. Glandulars are best taken under supervision of a qualified health practitioner.

Kelp: Like all sea vegetables, kelp provides minerals found in sea water, especially iodine and trace minerals that may be lacking in our depleted soils. For Westerners unaccustomed to including seaweeds in the diet, a small daily supplement of kelp in tablet or powdered form is a good idea, but don’t overdo-excess iodine may also cause thyroid problems.

Noni Juice: Juice of the Tahitian Noni fruit is revered by the Polynesians for its curative powers, possibly due to the presence of an alkaloid precursor called xeronine, which contributes to the effectiveness of proteins on the cellular level. Noni juice has been used successfully to treat blood sugar problems, injuries and pain, digestive disorders, depression and many other ailments. It should be taken on an empty stomach.

Wheat Germ Oil: Expeller-expressed wheat germ oil is an excellent source of natural vitamin E, which is our best natural protection for the cell membrane. The Shute brothers of Canada demonstrated that vitamin E supplements are an effective protection against heart disease. In their studies they used wheat germ oil, not synthetic vitamin E preparations.

Yeast: Dried nutritional yeast is an excellent natural source of B complex vitamins (except for B12) plus a variety of minerals. Look for yeast that has been processed at low temperatures. Yeast does not contribute to Candida as has been claimed-Candida feeds on refined carbohydrates, not yeast. The late eminent physician Dr. Henry Bieler treated many cases of chronic fatigue with yeast supplements.

From: Nourishing Traditions: The Cookbook that Challenges Politically Correct Nutrition and the Diet Dictocrats by Sally Fallon with Mary G. Enig, PhD.
Copyright © 1999. All Rights Reserved.

Taken from the Weston A. Price web site http://www.westonaprice.org