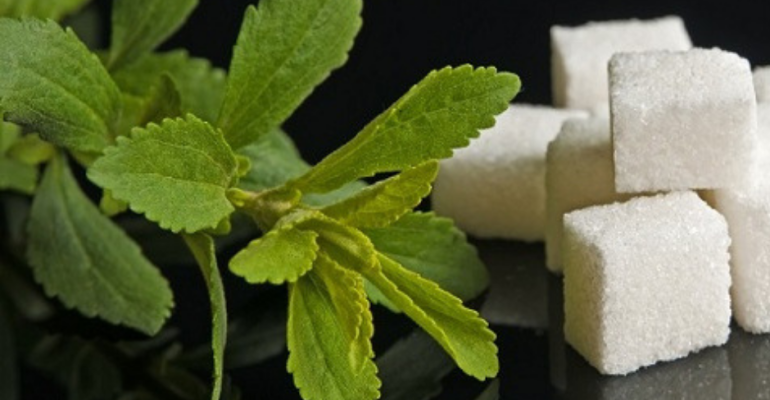 The stevia plant (Stevia Rebaudiana) is a leafy, green plant, indigenous to South America and originates from the sunflower family (Asteraceae). It was originally used as a natural sweetener by indigenous populations in Paraguay and Brazil. Stevia is a no -calorie sweetener which is associated with several health benefits.

Where does Stevia’s sweet taste come from?

To date, more than 40 different steviol glycosides have been identified in the stevia plant. Each of these steviol glycosides has its own unique taste profile and sweetness intensity, which can be up to 350 times sweeter than sugar, but all share a similar molecular structure where different sugar moieties are attached to aglycone steviol (an ent-kaurene-type diterpene).

Purified stevia leaf extracts can taste different depending on which steviol glycoside is present and manufactures are actively researching the best tasting varieties.

Is there evidence to support the use of Stevia?

In 2012, Nutrition and Cancer highlighted a ground breaking laboratory study that, for the first time ever, connected stevia consumption to breast cancer reduction. It was observed that stevioside enhances cancer apoptosis (cell death) and decreases certain stress pathways in the body that contribute to cancer growth.

An article published in Journal of Dietary Supplements evaluated how it affects diabetic rats. It was discovered that rats treated with 250 and 500 milligrams every day “significantly” reduced fasting blood sugar levels and balanced insulin resistance, triglycerides and alkaline phosphatase (which can be raised in cancer patients).

Another study (2009) showed that stevia extract had positive and encouraging effects on overall cholesterol profiles. Researchers found that there were no adverse stevia side effects on the health status of the subjects involved in the study. Researchers concluded that the extract effectively decreased elevated serum cholesterol levels, including triglycerides and LDL (“bad cholesterol”), while increasing good HDL cholesterol.

How it is absorbed through the body

Steviol glycosides are not absorbed intact. Once consumed, they pass through the upper gastrointestinal tract, including the stomach and small intestines, fully intact. Once steviol glycosides reach the large intestine, colonic bacteria remove all of the glucose units, leaving only the backbone, steviol. In humans, steviol is absorbed into the body, quickly modified in the liver, and excreted in the urine as steviol glucuronide.

Research has shown that there is no accumulation of stevia (or any by-product of stevia) in the body during metabolism.

How to use Stevia?

The best quality stevia will have no additives, including other sweeteners and does not contain any colourings and is a non- GMO certified.

Stevia it is available in both powders and liquid forms, but we have found that the liquid form is much cleaner, without additional additives and excipients. It is also easy to add to beverages and smoothies, as well as using it in cooking.

So, what is the analogy in terms of the dosage:

We like the NKD Pure Stevia Liquid that comes in a 50ml glass bottle (no plastic) and contains the following ingredients:

Dosage: Add 3-6 drops of Stevia to tea, coffee, protein shakes, porridge and anything else you like!