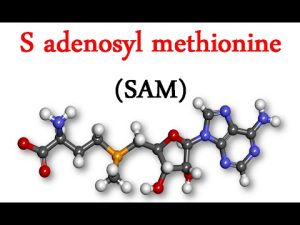 S-adenosylmethionine (SAMe) is not found in food, but the methionine amino acid is naturally found in the tissues and fluids in the body. SAMe plays a role in the immune system to maintain cell membranes, and help to produce and break up brain chemicals, such as serotonin, melatonin, and dopamine. SAMe helps the production of neurotransmitters in the brain to affect mood and feeling overall. It works with vitamin B12 and folate or vitamin B9. Either vitamin B12 deficiency or folic acid can reduce SAMe levels in your body.

SAMe is believed to help relieve the pain of osteoarthritis. Even in Europe, over the years has been used to reduce depression. Researchers also have examined the use of SAMe in the treatment of fibromyalgia and liver disease.

SAMe is a substance found all over the body that is used in the methylation pathway. This pathway is a complex circuit that leads to products that affect our DNA, our energy and our mood. SAMe is gaining a reputation for benefits to a couple of common problems prevalent in Western medicine. SAMe has been shown to benefit pain management in arthritis sufferers. In one study, 1,200 mg of SAMe was as good as Celebrex in controlling pain [Source: Naim]. A second study compared SAMe to nonsteroidal anti-inflammatories (NSAIDS) and found SAMe to be as good for osteoarthritis [Source: Soeken, Muller-Fassbender]. This is very good news, as NSAIDS can often carry significant side effects such as stomach ulcers, bleeding from the intestinal tract and kidney damage. Further studies have shown that 600 mg of SAMe daily may be enough to maintain pain control for arthritis for extended periods of time [Source: Bradley, Konig]. For those having to constantly take NSAIDs, SAMe might offer a safe treatment and lessen side effects.

SAMe may also help with depression, a very common diagnosis that can be hard to treat. SAMe appears to be a safe and successful approach for depression relief [Source: Williams, Goren]. SAMe is involved in the production of the neurotransmitters epinephrine and melatonin. This becomes important, because melatonin is needed for deep, quality sleep. Sleep loss is a common symptom of both chronic pain and depression. This leads to struggles with both pain and depression, a common combination.

SAMe can hold benefits for the liver and detoxification. It was found to help improve the utilization of glutathione, the body’s major detoxifier [Source: Tchantchou]. SAMe offered protection to the liver when the body was exposed to a significant chemical toxin [Source: Gasso]. Interestingly, low levels of SAMe were found in one study of heart disease patients [Source: Loehrer].

The dosages used for SAMe were 600-1,200 mg daily. One study went as high as 1,600 mg. It should be noted that B-12 and folic acid are needed to help the body provide adequate SAMe. Those using SAMe for depression in particular may want to consider extra B-12 and folic acid supplements. SAMe has been tolerated very well according to research. One study documented a manic episode with treatment, so those with a history of bipolar disorder should discuss SAMe with a physician before trying it.

As a supplier of a methyl group and organic sulfur, SAM-e drives complex metabolic reactions that control cell growth and lifecycle, inflammation, brain chemistry, and more [3, 4].

SAM-e prevents uncontrolled cell division, which is the main feature of cancer cells. It also inhibits MMP, an enzyme involved in cancer progression and inflammation [5].

It combats oxidative stress and protects the cells by boosting the production of a master antioxidant, glutathione [9, 10, 11]. 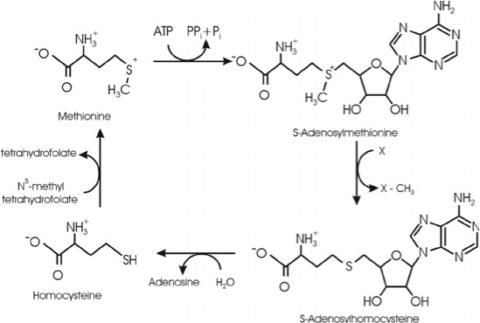 The body can produce SAM-e from a sulfur-containing amino acid, methionine. It does this well enough under optimal circumstances, but certain conditions — such as depression, liver disorders, and folate deficiency — may hinder this process [12, 13].

Along with folate and vitamin B12, S-adenosylmethionine participates in the one-carbon cycle (shown in the image above). Besides homocysteine metabolism, this cycle [14, 15, 16]:

SAM-e is key to proper methylation in the body.

It keeps the DNA methylated, which may prevent cell mutations. It also methylates amino acids and phospholipids and increases important neurotransmitters. This helps SAM-e achieve potential antidepressant and other effects we’ll outline throughout the post [17, 18].

You should not use SAMe if you are also using a prescription antidepressant medicine.

Do not use SAMe if you have used an MAO inhibitor in the past 14 days. A dangerous drug interaction could occur. MAO inhibitors include isocarboxazid, linezolid, methylene blue injection, phenelzine, rasagiline, selegiline, tranylcypromine, and others.

Before taking this supplement

You should not use SAMe if you are also using a prescription antidepressant medicine.

Do not use SAMe if you have used an MAO inhibitor in the past 14 days. A dangerous drug interaction could occur. MAO inhibitors include isocarboxazid, linezolid, methylene blue injection, phenelzine, rasagiline, selegiline, tranylcypromine, and others.

Ask a doctor, pharmacist, or other healthcare provider if it is safe for you to use this product if you have:

It is not known whether SAMe will harm an unborn baby. Do not use this product without medical advice if you are pregnant.

It is not known whether SAMe passes into breast milk or if it could harm a nursing baby. Do not use this product without medical advice if you are breast-feeding a baby.

Do not give any herbal/health supplement to a child without medical advice.