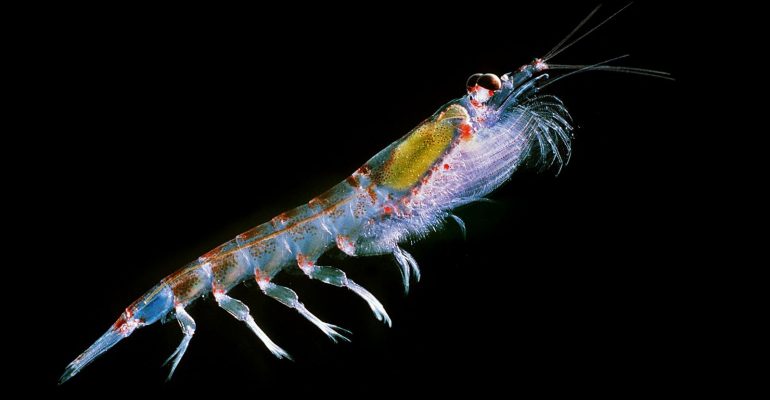 Krill oil is extracted from a tiny shrimp (crustacean) that belongs to the species of Euphausia Superba.

According to research findings, Krill oil is reported to ease inflammation in patients with cardiac disease, rheumatoid arthritis, and osteoarthritis.

It is a rich source of the long-chain n-3 polyunsaturated fatty acids (PUFAs), eicosapentaenoic acid (EPA) and docosahexaenoic acid (DHA).

Marine-based animals such as shrimps and Krill oil are rich in Astaxanthins, an antioxidant carotenoid, which is a potent anti-inflammatory and pain reliever. More than that, Astaxanthin reduces the inflammatory compounds that drive many chronic diseases. Astaxanthin supports the body’s natural ability to fight diabetes, cancer, neurodegenerative disorders, immune disorders and heart disease.

A randomized, double-blind, parallel-group, placebo-controlled study (Suzuki et al, 2016) investigated the effect of Krill oil on mild knee pain. The sample included 50 adults, aged 38–85 years old who were observed for a period of 7 months. The sample was split into two groups. Participants were randomized to receive 2 g per day of either the oil or an identical placebo for 30 days. There was an improvement in the participants that took the Krill oil in terms of pain while they were sleeping and standing. Therefore it seems that the use of Krill oil has an impact as a supplemental treatment for arthritis and joint pain.

Another randomized, double blind, placebo controlled study (Deutsch, L. 2007) investigated the effect of Krill oil on patients with chronic inflammation and pain in patients with osteoarthritis. The sample included 90 patients. The sample was split into two groups. Participants were randomized to receive 300 mg Krill oil daily and the other group receive a placebo.  The results of the study clearly indicate that taking Krill oil at a daily dose of 300 mg significantly inhibits inflammation and reduces arthritic symptoms within a short treatment period of 7 and 14 days.

A recent review of seven studies (Ursoniu et al, 2017) concluded that Krill oil is effective at lowering the LDL cholesterol and triglycerides, and may increase HDL cholesterol.

Another double-blind, randomized clinical study (Cicero et al, 2016) compared the effect of Krill and purified omega 3 (PUFA) in 25 mildly overweight people. Participants were randomized and half received 500 mg Krill oil twice daily, while the other half received 1,000 mg omega 3, twice daily. The results of the study showed that the intake of daily Krill oil improved inflammation more effectively, compared to the daily dosage of 2,000 mg  of purified omega-3s.

In one study out of South Korea (jung, JY, 2014), supplementation with omega-3 fatty acids was found to reduce inflammatory acne by an impressive 42 percent.

As if you needed another reason to get in your daily dose, some research shows that omega-3 fatty acids could be associated with a decreased risk of certain types of cancer.

In particular, studies have found that a higher intake of omega-3 fatty acids from supplementation or fish consumption may be associated with a reduced risk of prostate and breast cancer (Terry, PD, 2004). A study published in the European Journal of Cancer Prevention also found that higher consumption of omega-3 fatty acids was associated with a lower risk of colorectal cancer (Zhong, X, 2013).