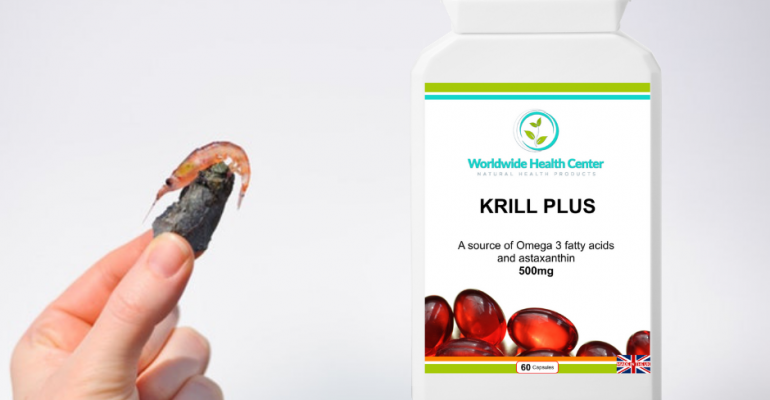 Krill are shrimp-like crustaceans that grow up to 2 inches long and serve as food for whales, fish, seals, and penguins. It’s estimated that krill may be one of the most abundant multi-celled organisms on the planet. They are predominantly sourced from the northern Pacific Ocean and the water surrounding Antarctica.

Krill are a source of omega-3 fatty acids, which your body can only get from food or supplements. Omega-3s are a critical part of the membranes surrounding each of your cells. Omega-3s give your body energy and also serve important jobs in your heart, blood vessels, lungs, immune system, and endocrine system.

Several kinds of fish are good sources of omega-3s, as are krill. Many people choose to ingest fish or krill oil to get the benefits of the omega-3s in fish and krill. There are three kinds of omega 3s: alpha-linolenic acid (ALA), eicosapentaenoic acid (EPA), and docosahexaenoic acid (DHA). Krill and fish oils contain EPA and DHA. Fish oil contains more omega-3s than krill oil. Krill oil, on the other hand, has the advantage of having a lot of phospholipids, which help your body better absorb omega-3s.

Why Krill Oil vs Omega-3 From Fish?

Generally, Krill oil is more expensive than fish oil, so why purchase Krill oil if you can get your omega-3 from cheaper fish oil? The main reason is that the omega-3 is usually extracted from large fish that are quite toxic in mercury. Krill, being a lot smaller, has been found to be a lot cleaner, and also contains Astaxanthins that are super-antioxidants that have additional health benefits.

This powerful pigment provides certain types of seafood a red-orange hue and has been shown to support healthy vision, promote brain and heart health, and even increase male fertility.

Krill oil, like fish oil, is a rich source of omega-3s, and it also offers antioxidants and vitamin A.

Research suggests that omega-3s are likely to help with any type of illness involving inflammation in the body. One study showed that taking krill oil reduced pain, stiffness, and inflammation in patients with rheumatoid arthritis.

There is significant evidence suggesting that taking krill oil can reduce both the pain and emotional effects of PMS. The research shows that krill oil is much more effective for PMS symptoms than is fish oil.