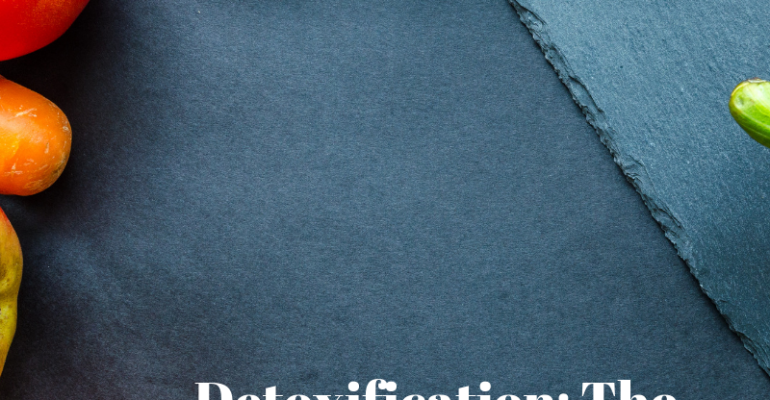 Detoxification is an important aspect of optimal health and has become a household word and a colloquialism that could mean anything from drinking a glass of carrot juice to entering a detoxification centre if you are an alcoholic or drug addict.

Detoxification is the process of removing the toxins that have been accumulating in the body tissues and organs throughout a person’s life.

These toxins will have been acting as metabolism blockers by literally poisoning the cells and not allowing them to function correctly.

You can have toxins stored in your body for years without experiencing any negative symptoms. It is only when the toxin levels become too high that you start to feel ill.

Where are the sources of toxins?

The toxins come from many sources such as:

Exogenous toxins: are those that enter our bodies from the outside, i.e. food additives, pesticides, herbicides, fungi from food, industrial

Endogenous toxins: toxins that are found or generated within the human body. This can occur when the body’s normal metabolic mechanisms function inefficiently. For example, it typically takes several steps to convert the amino acid methionine into cysteine. If one step is sluggish, an intermediate called homocysteine accumulates in tissues. Accumulation of homocysteine can damage the vascular system and contribute to heart disease.

Autogenous toxins: are generated within the body from miasmic influences, which are inherited tendencies that can pass through up to seven generations. Examples of these are psora, sycosis, tuberculosis, syphilinum and others. There is no detection of these pathogens with scientific testing, but their deep presence can affect the body’s organs, primarily by inhibiting a good immune response and lowering its resistance.

What are the benefits of a detoxification process?

Is there any way to detoxify my body?

There are natural, gentler ways of detoxifying the body of heavy metals and other xenobiotics.

In the Da Vinci Natural Health Center we used an alkaline detox diet for 15 consecutive days including fresh fruit, salads, freshly squeezed juices, steamed vegetables and vegetable soups as part of it.

This means that you ONLY eat these foods for the duration, most of which will be rich in the live enzymes, which are the tools required to flush out the toxins from the body. You must be patient and put your mind to it.

We strongly suggest that you try to eat as many raw fruits and vegetables as possible, including at least 1-3 fruit and vegetable juices daily. Carrot juice has a strong effect on the digestive system, provides energy, serves as an important source of minerals, promotes normal elimination, has diuretic properties and helps to build healthy tissue, skin and teeth.

We also encourage the use of green juice mixed with carrot juice and beetroot. This can be anything from fresh parsley, lettuce, kale, collard greens, Swiss chard, alfalfa, cabbage, spinach, turnip greens, watercress, celery, cucumber, green pepper, scallions, coriander, or any other green vegetable in season.

All green vegetables contain chlorophyll, which is very oxygenating for the body. It is also an effective antiseptic, cell stimulator, red blood builder and rejuvenator – therefore, helping to remove toxic sludge faster. Greens are also super-rich in live enzymes.

Each meal should begin with raw fruit or vegetables, seasoned with a little lemon, ginger, garlic, coconut or desired herbs. This way, they are available for digesting the fat, protein, and carbohydrates from the meal that follows. The enzymes in vegetables control or restrict the amount of waste deposited on your adipocytes.

These are the foods that are allowing during the detoxification phase – no other family of foods is allowed. You may eat as many of the following foods as you wish, but it is best to eat only when you feel hungry.

Wash all fruit and vegetables in a bowl of water with 4-5 tablespoons of grape vinegar added (not apple cider vinegar), to help wash away any pesticide/herbicide residues. Rinse afterwards with clean water. Here are the foods that you can eat in plenty – in fact, the more you eat and drink, the quicker you detoxify.

We cannot emphasise just how important the detoxification diet is to your success!

Are there any side effects during the detoxification process?

When the body detoxifies, it goes through various biochemical and physiological changes. Generally, on the first day of fasting the blood sugar level is likely to drop below 65-70 mg/dl. The liver immediately compensates by converting glycogen to glucose and releasing it in the blood.

After a few hours, the basal metabolic rate is likely to fall to conserve energy. This means that the heart, pulse and blood pressure will drop. More glycogen may be used from muscles, causing some weakness.

As the body requires more energy, some fat and fatty acids are broken down to release glycerol from the glyceride molecules and are converted to glucose. You may notice the skin becoming quite oily as these fatty acids and glycerol increase in the blood. The skin is one of the largest detoxification organs, so you may get some skin problems such as pimples, acnes or a pussy boil – this is all part of the body trying to cleanse. The complexion may become pallid for a day or two as the wastes accumulate in the blood.

The incomplete oxidation of fats may result in the formation of Ketones resulting in ketoacidosis. Combined with high levels of urea, resulting from protein metabolism, this state can cause several symptoms which may suppress appetite; they affect the satiety centre in the hypothalamus.

Generally, this takes a few days to happen and you may notice your appetite dwindling. You may get pains in different joints, or organs such as the lungs. There may be a considerable amount of yellow mucus released from the throat and expelled. The sinuses may also begin clearing with more mucus secreted.

Given that the body is releasing these toxins quickly during the first few days of the detoxification process, it should not surprise you to experience some changes in your body that may cause certain symptoms. Initially, for the first 2-3 days these symptoms can be a little unpleasant, SO BE WARNED! This may include headaches, nervousness, diarrhoea, upset stomach, energy loss, furry tongue, halitosis (bad breath), as well as acne or other skin rashes, a general feeling of malaise, frequent urination due to the toxins irritating the bladder and some of their existing symptoms may be exacerbated. All these symptoms indicate that the DETOX IS WORKING!

Are there any supplements that should I take to help with the detoxification process?

In addition, taking Vitamin C x 3 times daily during the detoxification process will also help. Vitamin C will help to absorb certain toxins as well as helping the immune system cope with a heavy burden of toxins that it needs to get rid of. We recommend a calcium/ magnesium ascorbate in a capsule form called VITAMIN C BLEND which is an alkaline form of vitamin C and much gentler to the stomach and gut.

Other supplements that we recommended include a herbal combination called HEPATO PLUS which is designed to provide extra support to the detoxification organs and systems of the body, particularly during periods of over indulgence in food, alcohol or smoking.

Another important herbal formula which we recommend is PARAFORM PLUS ONE which basically is one that is designed to eliminate parasites from the intestines, which we pick these up from food and water all the time. The ingredients have been hand picked for their anti-parasitic, antibacterial, anti-microbial, anti-fungal and anti-viral activities.

Yet another supplement that we recommend during the detox that gives the body a good energy boost is called SUPER GREENS PLUS. This is a 100% organic (Soil Association registered) superfoods powder, that can be used as a plant protein powder, light meal shake or daily nutrient booster.

It provides a broad range of vitamins, minerals, antioxidants and powerful phyto-nutrients through its multiple organic superfood, superfruit and herbal ingredients. A great all-round supplement to support energy levels, cleanse, detox, and alkalise the body – daily organic nourishment made easy!

Stay with the detoxification process, and allow yourself time to rest, particularly during the first few days. It is best starting on a Friday, given that you will have the weekend at home to get organized and rest when you need to.

We do not recommend vigorous exercise during this initial period, but a 20-30-minute walk with a friend or loved one in an open-air park is fine. You need to conserve your energy levels for the detoxification process. Under normal circumstances, the body uses 80% of its energy for detoxification, which is a substantial amount, and this will increase during the 15 days of this intensive detox programme.